The falcons have four eggs in the nest!  Peregrine falcons lay an average of four eggs in a clutch with each egg laid a few days apart.  The first egg was laid on April 16, the second on April 18, the third on April 20, and the fourth on April 24.  Incubation takes 29 to 32 days.  She started closely sitting on the eggs by April 24 so hatching could take place as early May 22.  For now, the female spends all of her time warming the eggs and turning them.  She is observant of any dangers outside the nest but the male is nearby protecting their territory.  Occasionally he will come to the nest to relieve her of her incubation duties and provide her with food.  Here we can see the first three eggs when she stands up to reposition herself: 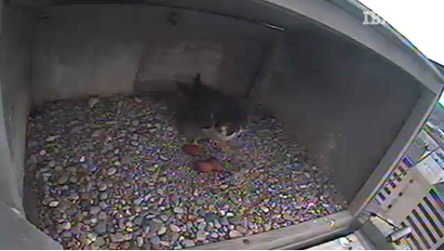 …And then there were four!

Liz Toth is the Associate Curator of Live Animals at the Boonshoft Museum of Discovery.

The Boonshoft Museum is southwestern Ohio's only Science & Technology Center, Zoo, and Children's Museum. We celebrate all things science and encourage people of all ages to exercise curiosity and explore the world around them!